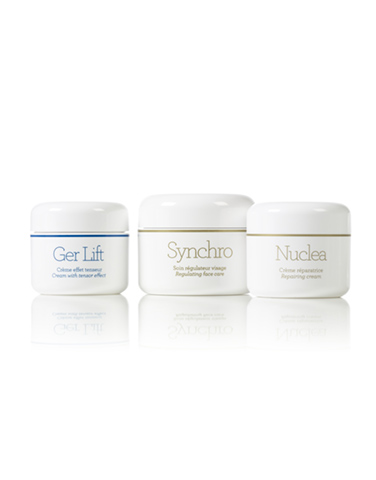 Discover the benefits of Gernétic with the Anti-age Set that contains a combination of  Gernétic products to boost your skin’s natural health and to combat the signs of ageing.

Synchro Regenerating Cream
Synchro is a concentrated cream with unrivalled regenerating and healing powers. It is the one cream you cannot go without. It is at the very core of Gernétic’s research and philosophy.
Synchro’s cocktail of amino acids, trace elements, vitamins and nurturing oils is designed to regenerate the epidermis cells. It has significant healing capabilities and it restores the natural skin’s defence system.
Synchro has anti-inflammatory, antibacterial and soothing properties that alleviate a number of skin problems.

Morning
After preparing the skin with Glyco Cleanser and Fibro Lotion apply a small amount of Marine Ger-Lift to the face, neck and décolletage. Follow with the application of Synchro Regenerating Cream.

There are no reviews yet.

Be the first to review “Anti-Ageing Pack” Cancel reply